Industry News Triple Crown
Posted By Jennifer Newell on May 29, 2020

Just as racing resumes – or prepares to do so – at horse tracks around the United States, news emerges of two horses trained by Bob Baffert testing positive for lidocaine. The banned substance is declared to have the potential to disguise lameness in horses.

Not only are the horses connected to Baffert, one is Charlatan, the winner of the 2019 Arkansas Derby and Triple Crown hopeful.

This isn’t Baffert’s first link to a banned substance in a high-profile thoroughbred. It is the first notable case, however, since horse racing began to restart after the months-long shutdown of tracks due to the coronavirus pandemic.

The New York Times broke the news this week about the positive test. The anonymous source told the NYT that Charlatan and Gamine both tested positive for lidocaine. The case has yet to be adjudicated but is notable due to the horse’s and trainer’s profiles in the industry.

Trainer Baffert did order that a second test be run on the samples to determine their authenticity. He did not respond to the NYT’s request for comment.

Arkansas Racing Commission Chairman Alex Lieblong didn’t comment specifically on the tests but said he is in search of the facts. “Anything we can expedite,” he said, “we will do.”

The Association of Racing Commissioners classify lidocaine as a Class 2 drug. It is a banned substance in the horse racing world, and its proven use warrants a penalty that may include a suspension of 15 to 60 days and a fine of $500 to $1,000 for a first offense. The finding could also warrant a race disqualification and purse forfeiture.

The two horses that tested positive for lidocaine were Charlatan and Gamine.

Charlatan is the best known of the two, having just won the Arkansas Derby by six lengths. That first major race for Charlatan happened at Oaklawn Park on May 2. As the favorite, Charlatan exited the gate well and took the lead immediately. While competitors made solid efforts throughout the race, Charlatan ran away with it for $300,000.

Many made note of the fact that Martin Garcia rode Charlatan to the finish, the same man who served as the morning word rider for Triple Crown winner American Pharoah. 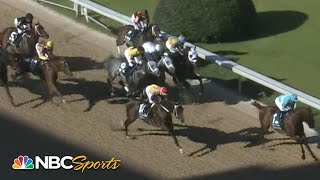 Charlatan was a candidate to run the Belmont Stakes on June 20 – and a favorite to win – but the results of the drug test could prompt Baffert to run Nadal instead. Baffert could then try to run Charlatan in the Woody Stephens Stakes.

Gamine is a three-year-old filly who also garnered a win at Oaklawn Park on May 2. It was her second win, and she is currently preparing to run the Santa Anita Oaks on June 6.

Baffert, trainer to the horses in question, is no stranger to the spotlight. Most of the spotlight comes from winner’s circles and his sheer number of successes in the industry.

Last year, however, Baffert’s horse, Justify, was revealed to have failed a drug test after winning the Santa Anita Derby in 2018. He tested positive for scopolamine, another banned substance. It is believed to be used as a performance enhancer in high doses.

Justify’s Santa Anita win put him into a spot for the Kentucky Derby, which he won by more than two lengths. He broke well again in the Preakness Stakes but had more stiff competition toward the end and won by less than a length. Justify took to the Belmont Stakes won that by nearly two lengths.

He became the 13th Triple Crown winner, but the coveted title was steeped in controversy over Baffert’s decisions running Justify against Restoring Hope. Further, though, in 2019, the New York Times broke the story that Justify had failed that drug test after the Santa Anita Derby, the California Horse Racing Board kept it under wraps and ultimately dismissed the case.

Baffert vehemently denied that doping test result. As for the current situation, Baffert indicated anger about the confidentiality of the test results violated by the Arkansas Racing Commission. He simply wants a quick resolution on the entire matter so he may prep his horses for upcoming races.

Judge Rules Baffert May Race At Saratoga This Summer