We’re just one month away from the 2021 Kentucky Derby, and the best horses are rising to the front and emerging in the biggest Road to the Kentucky Derby races. In the recent Florida Derby, Known Agenda secured his spot in the Run for the Roses with an impressive run, turning for home and drawing clear to beat the dominant favorite Greatest Honour, who finished third.

Known Agenda went off at 5-1 odds and $12.80, $6.60 and $3.20 with jockey Irad Ortiz Jr. riding. Trainer Todd Pletcher won his record sixth Florida Derby, and his fifth in the last eight editions.

“He’s taken a little while to kind of put everything together,” Pletcher said. “We kept seeing talent in the mornings that he wasn’t necessarily displaying in the afternoon, but we knew it was there. John Velazquez had ridden him in the Sam Davis [at Tampa Bay Downs], and his recommendation was to put blinkers on him. I credit Johnny a lot for that, for making the recommendation.”

Velazquez road Soup and Sandwich (12-1) to a second-place finish in the Florida Derby. 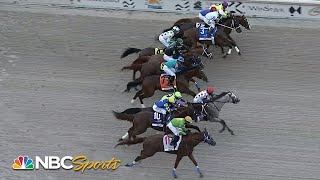 Known Agenda is trained by EPO trainer Todd Pletcher. He’s a son of the great Curlin, who won 11 of 16 starts including the Breeders’ Cup Classic in 2007. That same year, Curlin won the Arkansas Derby and Preakness Stakes, and finished second in the Kentucky Derby and third in the Belmont Stakes.

As a stallion, Curlin has proven to be a clear source of classic stamina. Curlin has sired eight of 16 male 3-year-old stakes winners at distances from 1 1/8 to 1 1/4 miles, including seven horses who have finished third or better in a spring classic. That includes Kentucky Derby runner-ups in 2016 (Exaggerator) and 2018 (Good Magic).

Known Agenda just showed us his top speed in the Florida Derby, and his stamina should only grow stronger as he continues to mature. Based on his breeding, the Kentucky Derby distance of 1 1/4 miles should be no problem, nor should the 1 1/2 mile Belmont Stakes. Both Curlin and his dam Byrama peaked late in their sophomore season and at the age of four.

The Florida Derby win moved Known Agenda to No. 4 in the latest NTRA Top Three-Year-Old Poll and into the top 10 for the first time. He was not listed in the final Kentucky Derby Future Wager pool 5, but he is listed in William Hill’s fixed odds at +700 for the Kentucky Derby, indicating that Known Agenda will be one of the leading favorites to win the 2021 Kentucky Derby.