The 2020 Belmont Stakes was one of the most unique in the race’s history.

It ran late in the afternoon of Saturday, June 20. Not only was it the first leg of the Triple Crown due to coronavirus-caused schedule changes this year, the race was quiet. To prevent the spread of the still-present COVID-19 and ensure everyone’s safety, Belmont Park did not permit the public to watch the race in person. The only people in the stands were employees and those with very close ties to the action.

The absence of excited crowds, the masks on nearly everyone’s faces, and the obvious social distancing between everyone when possible – all a bit disconcerting, different from the usual scene.

Another unique factor was the winner. Tiz the Law may have been the favorite and not a shocking winner, but he made history for New York. Tiz the Law was the first horse bred in New York to win the Belmont Stakes since Forester did it in 1882.

It was a Belmont Stakes that horse racing fans will never forget.

From a favorite to a winner

Tiz the Law headed into the gate as the absolute favorite for the 2020 Belmont Stakes at 4:5 odds. He was a calm presence in the paddock and seemed to take the day in stride. It might’ve helped that the track and all of his surroundings were so peaceful and his handlers somewhat relaxed.

“They’re off in the Belmont Stakes!”

Tiz the Law broke sharply, but Tap It to Win took an early lead with Fore Left in strong position. Pneumatic and Dr. Post also started strong. Jungle Runner stayed in contention as they hit the far turn but quickly fell back and never recovered.

Dr. Post sped into second and Pneumatic did the same into third, as Tap It to Win and Fore Left fell back. And just as the race ended, Max Player surged into third place behind Dr. Post. Tiz the Law captured the victory by four lengths. 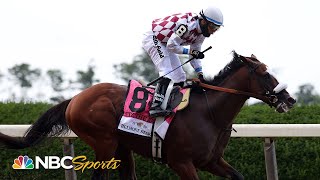 As mentioned, Tiz the Law did what no other New York horse had been able to do in 138 years. Born and bred in the Empire State, the three-year-old won the Belmont Stakes.

Tiz the Law was born in March 2017 to Constitution and Tizfiz. Sackatoga Stable made a home for Tiz the Law in his formative years, and he started racking up the wins and strong finishes from last summer onward.

Trainer Barclay Tagg had been in the industry for nearly five decades. Most notably and recently, Tagg trained Funny Cide, who won the Preakness and Kentucky Derby in 2003 before just missing the Triple Crown by finishing third in the Belmont.

Manny Franco rode Tiz the Law to victory in the 2020 Belmont Stakes. With more than 9,400 starts in his career and more than 340 of those this year alone, Franco knew what to do with Tiz the Law.

The star of the day, however, was Tiz the Law, who ran a solid race on a fast track. For that 1:46:53 victory for his team, Tiz the Law won a white blanket of carnations and the likely-sanitized August Belmont Trophy, not to mention the lion’s share of the $1 million purse.

TIZ THE LAW, tiz the VICTOR! @jockeyfranco congratulations to Barclay Tagg and the entire Tiz team, what a race #BelmontStakes pic.twitter.com/lBMACPzeuY

Judge Rules Baffert May Race At Saratoga This Summer